The National Western Stock Show is considered the Super Bowl of Livestock Shows as one of the World’s Largest Cattle Shows!

The National Western Stock Show hosts nearly 25 breeds of cattle during its 16-day run, which will be January 9-24, 2021. Visitors are able to view traditional competition among exhibitors of breeding animals ultimately used for seedstock in agricultural production (beef cattle, sheep and goats). National Western also offers competition among exhibitors of animals used primarily for recreation or companionship (llamas, alpacas, poultry and dogs). Viewing these events is all part of the Stock Show experience and can be done with a grounds admission ticket.

Youth involvement is one of the highlights of the livestock shows. Young exhibitors from across the nation participate in our competitive arenas for prize monies, national recognition for their achievements and a chance at college scholarships.

Specialty Shows
The specialty shows during Stock Show are not to be missed! Check out all these specialty breeds you can find during January. The 2021 Gold Trophy Bison Show and Sale is sanctioned by the National Bison Association and is the only bison show of this type in the world.

Although commonly called buffalo, the American Bison is not a true buffalo. Its closest relatives are the European Bison (Wisent) and the Canadian Woods Bison, not the buffalo of Asia or Africa, such as the Cape Buffalo or Water Buffalo.

Bison were the center of life for the Plains Indians, providing them with food, clothing, shelter, and spiritual aspirations. GOAT – The Boer goat was developed in South Africa as a breed meant for meat production. The term “Boer” refers to the descendants of the Dutch immigrants, most of them farmers, who settled the country; thus, Boer goat simply means “farmers’ goat.” Because of the intense selective breeding over the past 50 years or more by South African goat breeders, the Boer goat is considered far superior to any other goat for meat production. It is known for rapid weight gain, heavy muscling and high fertility.

Because the Boer was selectively improved for its meat production ability and its ability to pass on that trait to its offspring, along with other traits including pasture hardiness, the addition of a Boer buck to a commercial meat goat herd can improve the meat characteristics of the offspring without making them too soft to be pasture grazed. LLAMAS – along with alpacas, guanacos and vicunas, are members of the camel family and originated on the central plains of North America about 10 million years ago. They were domesticated in the Andean highlands of Peru more than 5,000 years ago.

Contemporary North American llamas are bred and raised for packing, wool production, cart pulling, animal-facilitated therapy, companion animals, exhibitions, guardians of other livestock, such as sheep and, increasingly, as FFA and 4-H projects.

Grease-free and lightweight, llama wool is warm and luxurious. A valuable commodity sought by fiber artists, such as weavers and spinners, the wool is a marketable product for llama owners.

The llama show at the National Western is one of the oldest and largest in North America. Be sure to attend An Afternoon with Llama and Alpaca on Saturday January 9, 2021 at 2:00 p.m. where you can interact face-to-face with the llamas, alpacas and exhibitors. ALPACAS – are America’s newest entry into the livestock industry. The initial animals were imported from 1984 until 1997 when the government closed the quarantine facility in Key West, FL. Since that time the industry has flourished and now approximates 160,000 in the US.

There are two alpaca breed types: the suri and the huacaya. The main difference between the two is their fleece production. The huacaya fleece has waviness or “crimp,” which gives huacayas their fluffy, teddy-bear like appearance. Suri fleece has little or no crimp, so the individual fiber strands cling to themselves and hang down from the body in beautiful pencil locks.

Alpaca breeders come from many walks of life. Increasingly, alpacas are becoming an important source of income for many people. Entire families are often full time breeders.

Virtually every alpaca is registered through DNA blood tests providing the lineage and their country of origin. Alpacas offer an outstanding choice for livestock ownership. They have long been known as the aristocrat of all ranch animals. Most of all, alpacas have a charismatic manner, they do very well on small acreage, and they produce a luxury product which is in high demand.

Shouldn’t you consider alpacas as part of your livestock future?

Be sure to attend An Afternoon with Llama and Alpaca on January 9, 2021 at  2:00 p.m. where you can interact face-to-face with the llamas, alpacas and exhibitors. POULTRY – Catch more than 600 birds the final weekend of Stock Show! A popular National Western exhibit for visitors of all ages, the poultry show & display is located in Stadium Hall 1 (Murdoch’s Junior Barn). See chicks & birds throughout the duration of NWSS on the 3rd Floor of the Expo Hall!

Poultry is a major food product worldwide. The fowl display includes chickens, turkeys, ducks, geese and other feathered animals such as pheasants, quail and guineas. SHEEP – From wool shows and sheep lead contests to breeding sheep exhibitions, the National Western Stock Show offers a variety of events to showcase one of the largest segments of the western livestock industry.

Known for their ability to graze in poor conditions, sheep are popular with farmers in the arid, almost desert-like, climates of the western United States. In addition to producing two marketable products, meat and wool, they also are raised with a lower overhead budget than most cattle.

A standard at the National Western Stock Show since it first years, sheep and wool events continue to make up a major segment of the West’s premier livestock exhibition. DOG – From backyard pets to a cowman’s top assistant, dogs are man’s best friend. And, the National Western Stock Show takes pride in highlighting the relationship between these amazing animals and their human counterparts.

National Western’s dog pulls, agility games and stock dog trials are continually some of the show’s most popular events.

The Dog Pull is held January 16, 2021 at 6:00 p.m. in the Stadium Arena. A dog weight pull is a sporting event that consists of dogs pulling a cart on wheels a distance of 16 feet within one minute. Dogs are hooked up in a specially designed harness, which disperses the weight evenly. SWINE – As part of the National Western junior livestock competition, more than 500 market hogs from across the nation come to Denver to be shown by youth aged 9 to 18. The swine are judged on conformation, structural correctness and muscling.

The junior market swine show is one of the highlights of the National Western Stock Show. Young exhibitors from around the U.S. participate in our competitive arenas for prize money, national recognition for their achievement and a chance at college scholarships.

The 2021 Junior Market Swine show begins with the showmanship competition on Tuesday, January 19 at 4:00 p.m. followed by the market show the following day on Wednesday, January 20 at 9:00 a.m. in the lower level of the Stadium Hall. YAK – Originally from the Himalayan Mountains, and a center point of the Tibetan culture, yaks were first introduced to North America in the early 1900s. Both a beast of burden and spiritual focus in their native land, yaks have been raised here for their beauty and intelligence, and as a source of fine fiber and lean meat.. 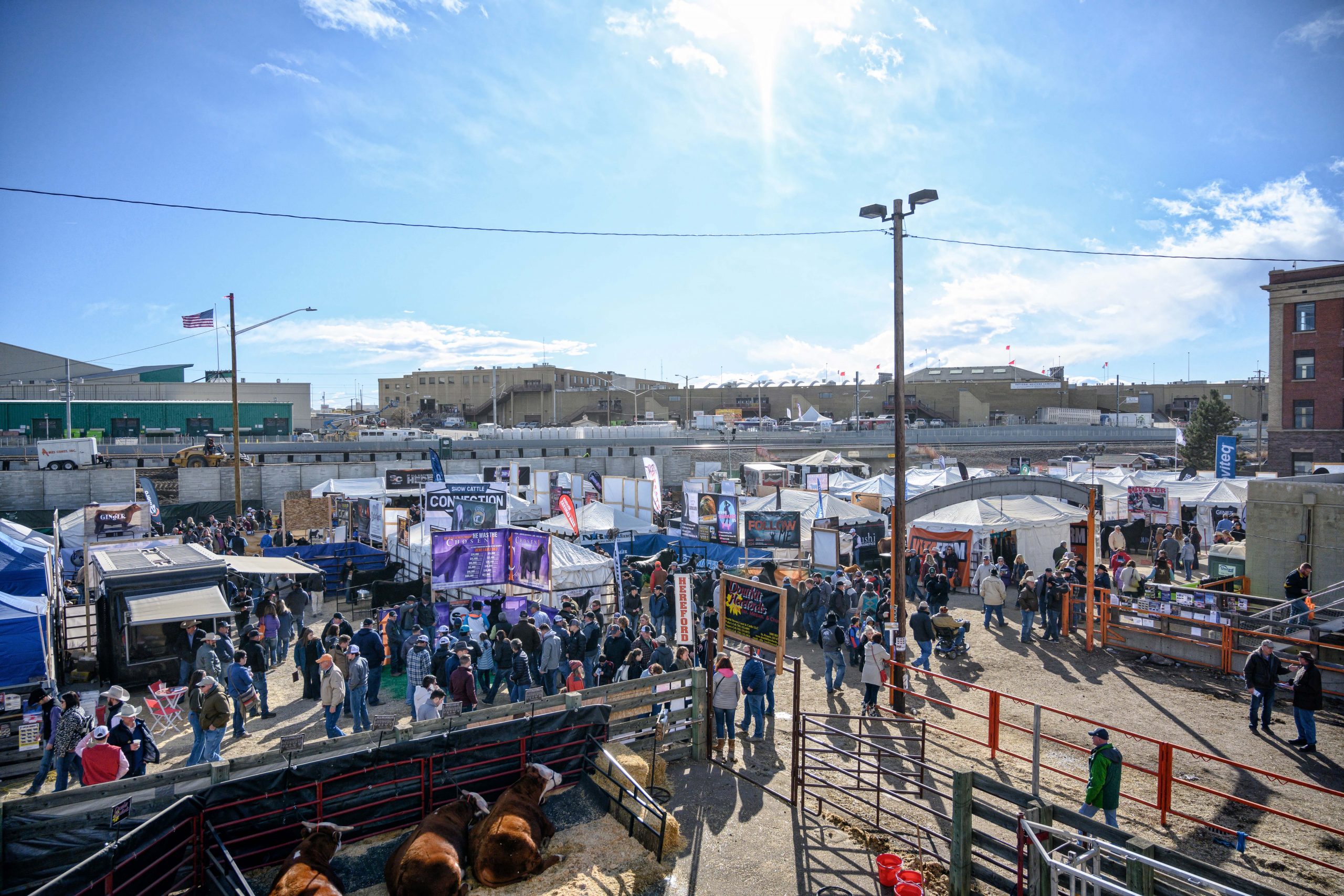 The Herd Sire Display Area is a huge attraction for cattlemen and cattlewomen from around the world. This open-air display area made up of over 200 pens is located in the historic Denver Stock Yards adjacent to the Exchange Building. For four days in January during the National Western Stock Show, registered purebred and club calf herd sire bulls are put on display in colorful & unique pens. Additionally, several purebred cattle associations, online sales companies, semen distributers and feed and genetic companies have display tents where they’re able to network with producers. The Herd Sire Display Bull Weekend is a one-of-a-kind event that offers marketing opportunities to a unique niche of the cattle industry. A display area at this caliber can’t be found at any other show in the world.

Given that the Herd Sire Display area pens are consistently sold-out, there is a plethora of positive feedback every year. Most all bull owners and company managers who have displays appreciate the fact that it attracts large numbers of the people within the niche market they do business in. Not only does it provide a great environment of networking between companies and exhibitors, it’s also an opportunity for the bull owners to make a debut of the up and coming and proven herd sires they’re trying to sell semen on.

A display area at this caliber can’t be found at any other show in the world. This area is open from January 16-19, 2020. There is usually a waiting list for this outstanding marketing event. To get on the list, contact the Livestock Office at 303.299.5559.

Junior Livestock Shows
Each year, hundreds of young agriculturists from across the country converge on Denver with their prize stock in tow. These youth between the ages of 9 and 18 spend thousands of hours over a period of months feeding, grooming and preparing their animals to compete in one of the largest youth exhibitions in the nation. Many of these youths also attend school, participate in 4-H and FFA chapters and compete in a number of other extracurricular activities concurrently.

What is their reward? National Western junior livestock exhibitors have the opportunity to win prize money, trailers, scholarships and awards. Additionally, 95 of the best animals qualify for the Auction of Junior Livestock Champions, where a winning animal could sell for more than $100,000.

The National Western hosts junior market livestock competitions for steers, lambs, swine and goats in the market-ready classifications. There are also competitions for breeding heifers and ewe lambs, as well.

Open Breeding Cattle Shows
The Livestock department processes in excess of 20,000 entries for each years National Western Stock Show. Known as the “Superbowl” of Livestock Events, exhibitors bring their livestock from all over the United States and Canada. Livestock producers and educators come from all over the world to view and buy the best livestock on earth!

Livestock exhibited at the National Western include more than 20 breeds of beef cattle along with bison, yaks and longhorns, sheep, hogs, goats, poultry, llamas and alpacas. Stock dog herding competitions are also held. Along with the many events in the main Hall and Stadium Arena, known as the “Hill”, the historic Denver Stock Yards is home to multiple cattle shows that include pens and carloads of cattle in competition.

The “Yards” is the only event of its kind in North America and is a Mecca of activity for the livestock industry. Held in the brisk open air of Denver in January the “Yards” is also home to many cattle sales where the best are auctioned off to the highest bidders. Producers display their livestock in the pens just as they have for decades at the National Western Stock Show.

This program is designed so successful participants catch a calf, feed it, and return with the animal one year later as a market steer.