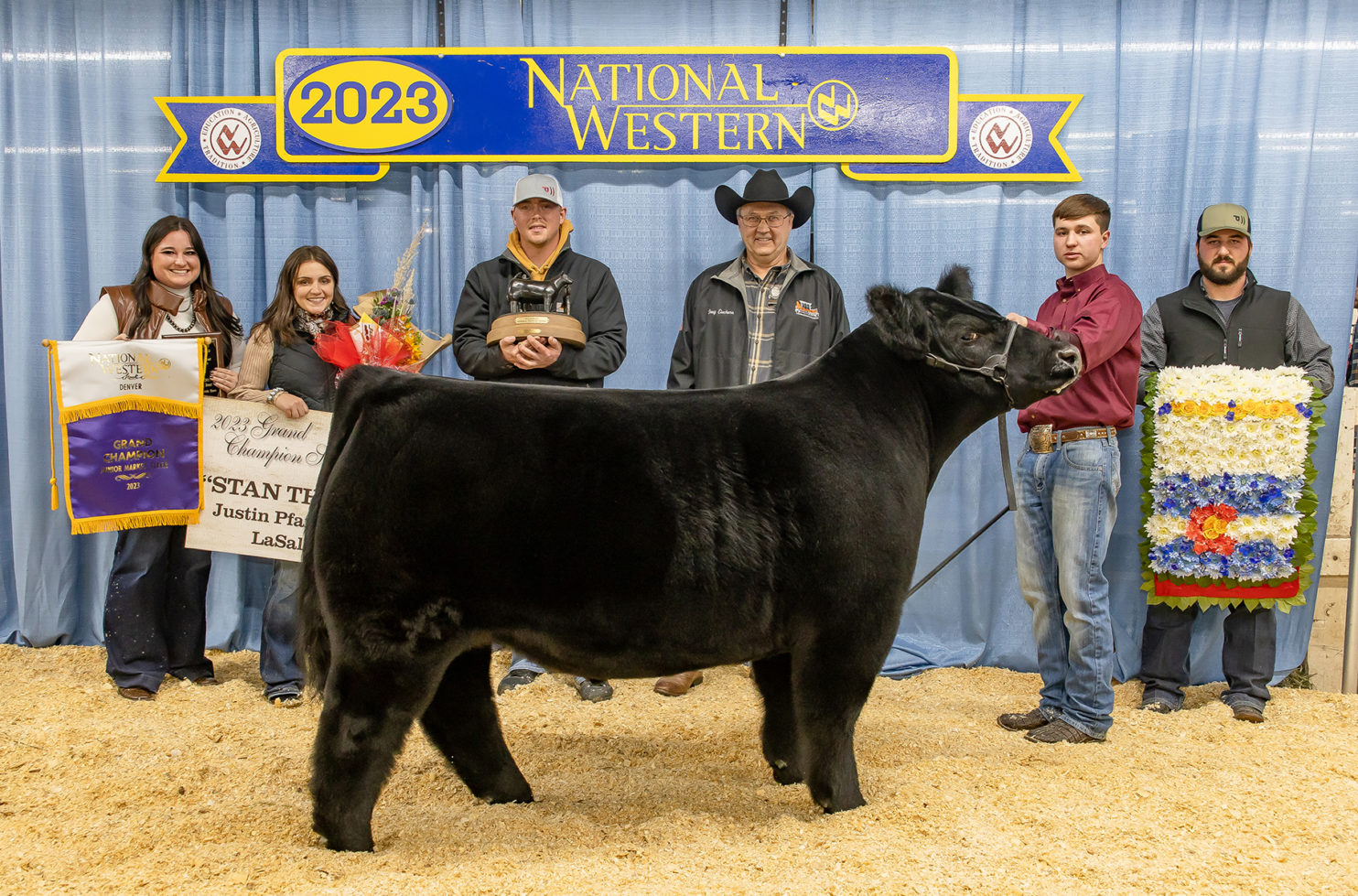 DENVER, CO. – The sold-out crowd at the 2023 Auction of Junior Livestock Champions attracted spectators and buyers eager to support young men and women in agriculture. This year, all eyes were on the two kids from Colorado, Justin Pfannebecker from LaSalle, Colorado, and his Grand Champion Steer named Stan, aka Stan The Man. Also from Colorado, the Reserve Champion Hog exhibited by Karsyn Fetzer of Kersey, CO.

The generosity of the buyers’ was evident as the sale numbers were tallied, totaling a new record of $585,000 across the top eight champion animals. The previous record from 2020 was $531,000.

The money invested supports the junior exhibitors that raised the animal as they plan for their agricultural future and college educations. In addition, a portion of the proceeds supports the National Western Scholarship Trust. The Scholarship Trust funds agriculture studies and rural medicine scholarships at colleges throughout Colorado and Wyoming. This year, 110 students received funds to aid their education. For more information regarding the Scholarship Trust, please visit nationalwestern.com.

The top eight junior market animals were auctioned live on 9NEWS at 6:30 p.m. The results are as follows:

The Grand Champion Steer, shown by 18-year-old Justin Pfannebecker of LaSalle, CO, sold for a record $200,000 to Ames Construction Company.  Justin has been showing steers and hogs since he was eight and plans to use the money to attend college at West Texas A&M.

The Grand Champion Hog, exhibited by Selah Salmons of Weatherford, TX, sold for $60,000 and was purchased by the Denver Metro Chamber of Commerce. The crossbred hog named Buzz weighed 253 lbs. Salmons’ favorite Stock Show experience is walking the green carpet. The 13-year-old enjoys riding cutting horses and playing softball outside the show ring.

The Reserve Grand Champion Hog was raised in Colorado and exhibited by 16-year-old Karsyn Fetzer of Kersey, CO. OXY purchased the 263 lb hog named Lil G for a record $75,000. Karsyn’s favorite part about the show ring is meeting new people. She hopes to attend the University of Florida to play volleyball.

The Reserve Grand Champion Lamb was purchased by TKM Foundation, Sean and Audra McNicholas, for a new record of $45,000. The champion lamb was exhibited by 18-year-old Bailee Amstutz, who has shown at National Western for eight years. Bailee cherishes her memories on the green carpet, enjoys livestock judging, and was the winner of this year’s NWSS 4-H Livestock Judging Competition.

The Reserve Grand Champion Goat, exhibited by 18-year-old Hayden Schroeder of Zephyr, TX, was purchased by Northwestern Holding, LLC for $25,000. Hayden also earned Stock Show success in the lamb division, where he exhibited the Grand Champion.

Established in 1906, the National Western Stock Show is a 501(c)(3) charitable organization that provides college and graduate-level scholarships in agricultural science, business, and rural medicine. It is our mission to serve producers and consumers throughout the world by being the premier annual livestock show and center for year-round events. The 16-day show in January also serves as an entertainment arena, hosting one of the world’s richest regular season professional rodeos, world-class horse shows, prestigious Coors Western Art Show, family and educational events, and Colorado’s largest western trade show. For more information, visit nationalwestern.com.